Manage applications, view your credentials and access your certifications.

To configure Card Payment Brick integration you need to follow the steps below:

The steps are performed on the backend or frontend. The Client-Side and Server-Side pills located immediately next to the title help you to identify which step is performed in which instance.
And to help, we've prepared a complete code example of the Card Payment Brick setup that you can use as a template.

Attention
The value shown in the id property below is just an example and can be altered, however, it should always match the id indicated in the render.

Include and configure MercadoPago.js library

Use our official library to access Mercado Pago features from your frontend securely.

Attention
JS code can be included in a < script > tag or a separate JS file.

You will need to install the SDK by adding the following in your HTML code:

Next, initialize the SDK by setting your public keyusing JavaScript code as follows:

With the container created and our SDK JS installed, the next step is to instantiate the Brick builder, which will allow generating the Brick. To create the Brick instance, insert the code below after the previous step.

Attention
During Brick instantiation, different errors may appear. For more details on each of them, see the Possible Errors section.

Once instantiated, the Brick can be rendered and have all its configurations compiled so that the final structure of the Brick is generated.

To render the Brick, insert the following code after the previous step and fill in the attributes according to the comments highlighted in this same code.

The result of rendering the Brick should be like the image below:” 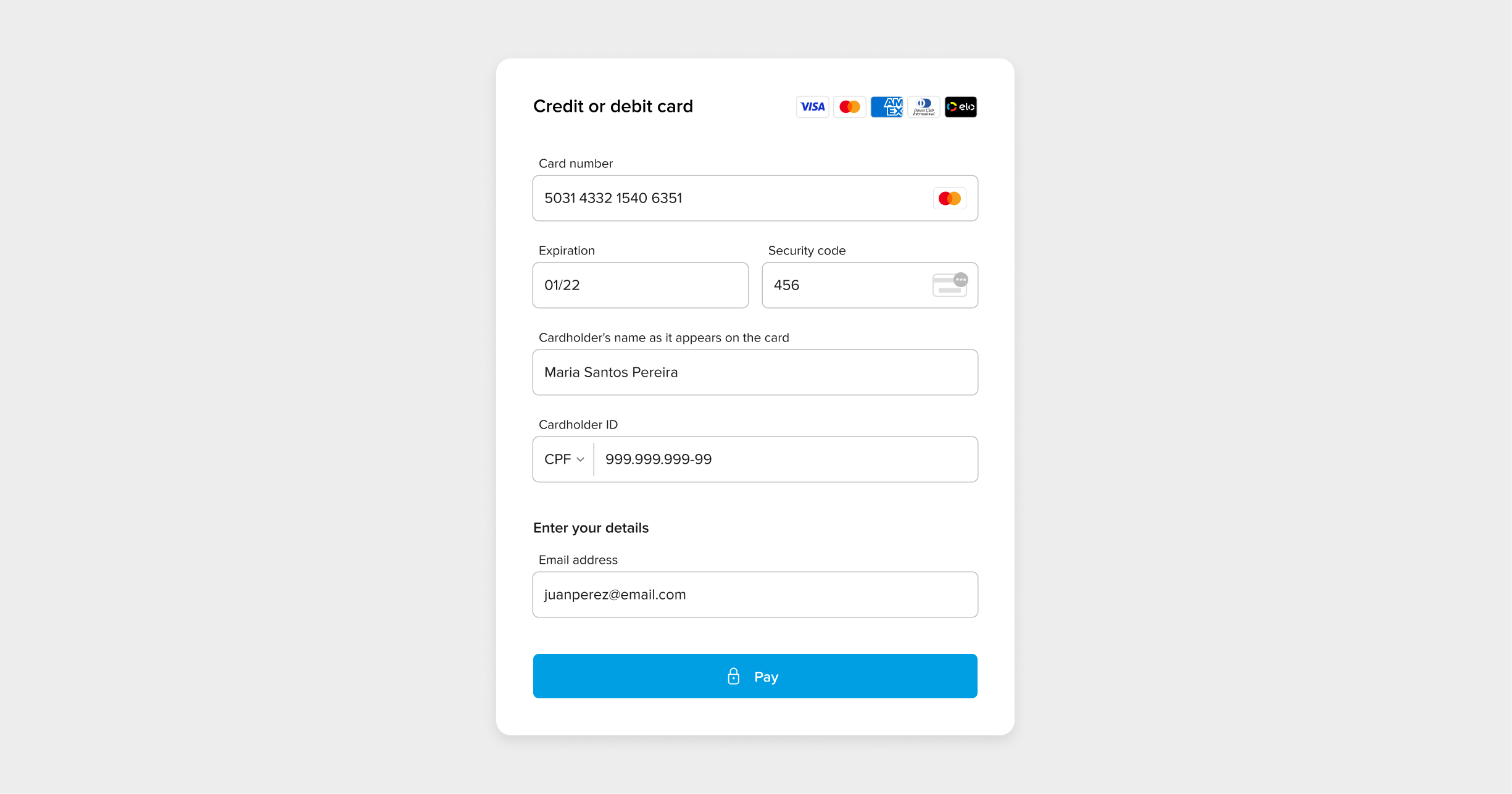 Attention
For an effective Brick control, the function submitted in onSubmit must always return a Promise. You should call resolve() only if your backend processes was successful. Call reject() if an error occurs. The reject() will make the Brick allow the fields to be filled in again and a new payment attempt possible. Also, when calling the resolve() method inside the onSubmit Promise, the Brick does not allow new payments. If you want to make a new payment, you must create a new Brick instance.
Previous
Requisitos previos
Conozca los requisitos previos necesarios para integrar Checkout Bricks.
Próximo
Enviar el pago a Mercado Pago
Después de configurar la integración del Card Payment Brick, consulta cómo enviar el pago a Mercado Pago.